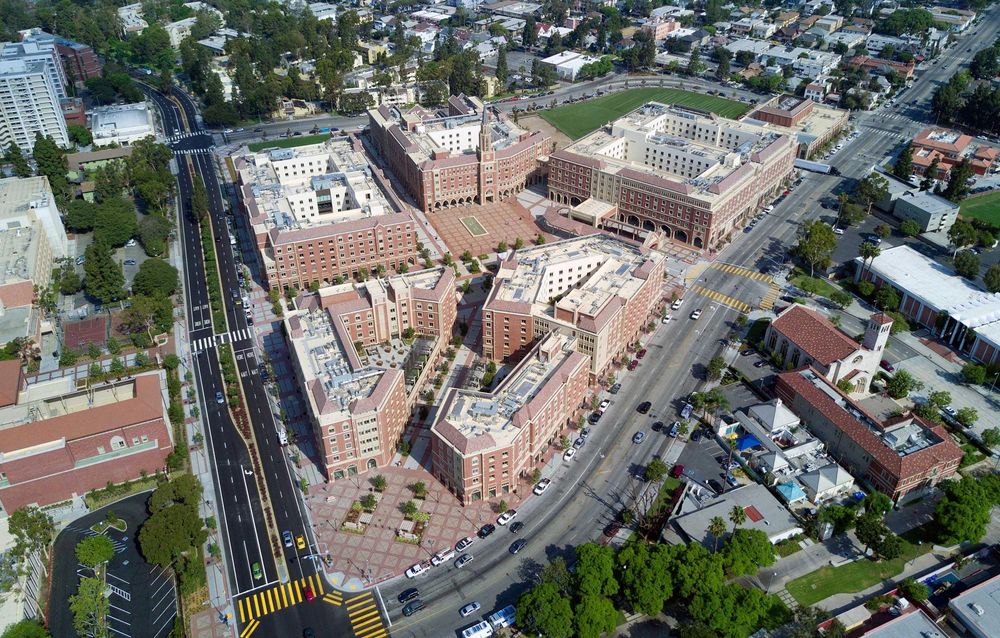 Since the 1880 founding of the University of Southern California, there have been ebbs and flows of change and migration to the size and style of its campus. The most significant of these was the city’s radical transformation from a colonial Hispanic town to the sprawling American metropole in a relatively short time frame. With the initial expansion in the late nineteenth century from a frontier town to an urban center, then the growth of the West Adams neighborhood for predominantly middle-class, white families in the 1920s and 1930s, USC’s conception of the “appropriate” environment for its students changed. Subsequently, white flight from the craftsman homes of West Adams and University Park to new areas like Beverly Hills and Brentwood and the influx of low-income Black and Latinx families into South Central Los Angeles changed how the university viewed its surrounding communities. Instances of uprising in the city such as the 1965 Watts Uprisings and 1992 LA Uprisings precipitated ideas of flight from USC’s historic and central location adjacent to downtown. USC’s conceptions of “appropriate” university communities1 relied on race-based and class-based language of what they deemed conducive to their economic and social interests. At best, USC’s plans for campus expansion from 1961 onward at surface level were race-neutral, but analyzing them more critically reveals the central role of race and class in the city and how USC sought to shape the surrounding community to their vision that has disproportionately removed low-income Black and Latinx residents...

If you want to read more, check out the full article here.

Get the latest posts delivered right to your inbox.

The USC Village: What Did $700 Million Accomplish?

No results for your search, please try with something else.